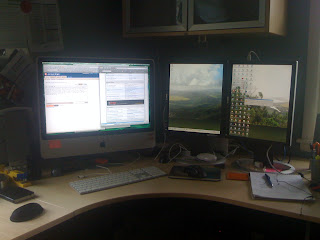 So - I was raised a PC guy, and have always used PCs at home and at work - primarily because Macs have always been so damn expensive. This year I bit the bullet and bought a shiny new iMac 24 to be my new primary workstation. I do like it a lot, and I can see what all the hubbub is about. However, I still like my PC, have a bunch of software for the pc,  and - though the Mac has become my primary station - I generally am running both Mac and PC at the same time. Currently I have the iMac 24 and a Dell Vostro desktop with two 17" Dell ultrasharp monitors. The monitors double as usb hubs - one attached to the mac, on to the pc.

To control the PC and Mac via one mouse keyboard combination, I use the open source Synergy (http://synergy2.sourceforge.net/) installed on both computers, with the Mac as primary. On the PC under Options>>AutoStart I have Synergy set to begin as soon as the computer starts, which means that - so long as the Mac is running and synergy is active, I can control the PC - even through the login process.

Like anyone who has been at this for a while, I have a good host of keyboard commands I have become familiar with tho help get things done quicker. The fact that Mac uses Command to do most of the things you would do with Control on the PC was a great big roadblock to me at first, and is still annoying. Also, Synergy allows you to share clipboards betwixt computers, so I commonly copy a URL or small bit of text on the PC and paste in Mac. This is greatly complicated by the fact that the keyboard commands for copy and paste are different as I move from computer to computer.

BUT NO MORE. On the mac, you can switch the functionality between Command and Control by going to System Preferences>>Keyboard & Mouse>>Keyboard>>Modifier Keys. Now, this just inverts the keyboard so that moving over to the PC I now hafta use Command - the copy/paste functionality across computers is still different. Thankfully, you can open up SynergyKM and go to [pc computer name]>>Screen Options>>Modifier Keys and invert Command Control there as well.

Eureka! I am back to my familiar (and more ergonomically pleasing) Control key dominance, and functionality maps up across both computers.
Posted by Jon D. Wright at 10:18 AM

Email ThisBlogThis!Share to TwitterShare to FacebookShare to Pinterest
Labels: tools